Pride Month is almost over and I realize I hadn’t said a word about it! You’d think an open minded Kink Mistress would be “all over that” subject, yes? Well I am, everyday with everything I am and do.  I support those who have found themselves discriminated against, bullied, harassed  and worse, for basically being themselves. How horrific is that! Imagine waking up tomorrow to a world which looks scornfully upon you just by being who you are. 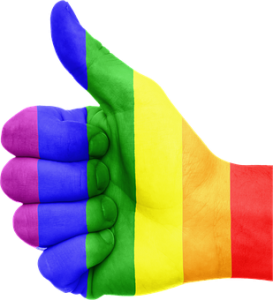 The thrust behind pride month (pun not intended, HONEST!) is to bring awareness and promote discussion and tolerance to the general population. Although I don’t go out and protest or march with my LGBT community doesn’t mean I don’t have any interest in the struggle. Doesn’t mean I don’t support them. But my support , like many other of my Sister Mistresses, comes from a continued awareness, through our blogs and posts regarding  people’s sexuality and and lifestyle. Fostering a common thread of acceptance for what you bring to the table and inspire others to do the same

Helping some with their struggles with gender identity, and providing a safe place for them to “be”.  That space is invaluable for many I engage with. They are unable to, or unwilling to confess their secret desires to the ones closest to them they yearn to be “KNOWN” and be treated with dignity and respect. Something everyone can identify with, you can, can’t  you?

Some of my thoughts on the subject

So the evolution of our popular modern cultures dictated “norms” for our lives over the last couple of thousand years.  How to behave to be looked upon favorably by the group, to be accepted into a kingdom of ever lasting life, or divine favor *yadda yadda yadda*. Those teachings excluded homosexuality. In the time-line of human evolution, these rules are  kinda late in the game! Homosexuals and homosexuality isn’t something new.

History And The World On Homosexuality

There are numerous articles out there from those who’ve studied homosexuality in animals, including humans and truth is homosexuality has been “with us” since the beginning of our species. Although , there might not be proof or evidence of the same a simple logical test can be applied for my statement to ring true.

-There are homosexuals today.
-The ancient Greeks are renowned for their practice of homosexuality.
-There are the American Indians who believe (as many other cultures do) that there are at least three “sexes”. Male, Female and a third which    encompass both male and female “soul”.
-Homosexuality is not only limited to the human animal.
-It would be a larger leap of logic to assume homosexuality was some how   “introduced”   in the very small time line of 3,000 years and didn’t exist for the previous 300,000 years of our evolution.

Tolerance For The Modern Human

Tolerance, easy to say difficult to assume and behave in kind.  Tolerance for “difference”. In some ways I understand humans knee jerk reaction to difference. Humans are meant to be social creatures, we run in packs. Without the group/pack there was grave danger for our ancestors. Compared to the majority of predators, our frail body’s just can’t compare to theirs. So, fitting in and being a valued member of the social group was necessary for survival. If the group looked unfavorably towards you, you might be shunned. A death sentence for many. So our brains adapted to a “group is all” mentality. We evolved into animals needing to “please” or at least be accepted by the group. Follow that through and anything “different” was to be feared, for what if the group didn’t accept, what would happen to you? We look to the group for guidance.  For all of our developments, and evolving we might think we’ve done over the past few million years, that group dynamic is still very much important to humans.

Evolving Past The Group Mentality

It’s time now, in our evolution, to use our brain and our ability to recognize difference isn’t necessarily “bad” and without difference none of us will be here. We are all different, it is only a matter to what degree. It’s time for us to use our critical brains to question and validate (or not) our community’s or religious teachings and ask ourselves: “how does that change my life”. How does a male who wants to have intimate relations with other males change you or your life. What difference does it make to you, and your ability to provide for your family if Jane down the street used to be John?  Fact is: It doesn’t. Not unless you make it. Homosexuality and gender identity differences have  been around since the dawn of human kind. Now is the time some worried about themselves , their impact and legacy. Stop trying to control and change,  things that will make no difference to them.

Life is short, don’t spend time on hating. Your life will be that much more rich when filled with love, tolerance and respect for all creatures around you. Pride Month and every Month, I support you and your sexuality.