Am I A Freak ? Accepting Your Kinky Desires

Hello fans, many of you at one time or another have asked yourself just that. Am I A Freak? Some of you are into anal sex, and you won’t just say to your best bud “Hey Joe, boy was I fucked big time by my wife’s girl cock last night”. You sometimes wonder how many of your friends have done this, and what they might say or think if they found out, and you say to yourself “they will think I’m a freak”. Today  I’m going to talk about that mindset and offer my interpretation and application of your  less than mainstream desires. Notice what I did there? I took the personal and emotional connotations to the word “Freak” and placed it exactly where it belongs, neutralized.

Am I A Freak

Let’s look at the word Freak. According to Merriam Webster the word freak is not a negative term, only one subset with a “sexual” element. In this definition it has no negative meaning IMO. Some of the meanings and usage of the word freak are:  a seemingly capricious action or event:[archaic] : a whimsical quality or disposition; an ardent enthusiast and finally the one which best represents most folks view of the word freak: [slang](1): a sexual deviate.

Deviate meaning someone who parts from traditional norms. So where is the negativity? Nothing here is wrong or negative. I actually take quite amount of pride of being a deviant. Mainstream be dammed, they do not live my life and I owe nothing to them.On my deathbed will I be concerned with the faceless masses whose ideals and desires don’t match mine? Or am I going to feel grateful and a peace knowing I lead a full life, exploring my human experience , including my sexuality to its fullest extent?

I agree our upbringing and early conditioning may cause a great deal of consternation and self doubt for many and that’s one of the big reasons I’m here. I’m here to tell you and help you accept that mainstream isn’t for everyone. Being different is what makes you special. Makes you worthwhile. 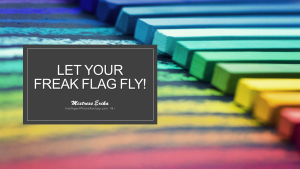 Mistress Experiences, Am I Freak

I had a call recently which prompted me to write this blog. A new to me person called “just to talk”.  Turns out their desire for bisexual experiences lead them to my ear. Nervous they were, never called a “sex line” before. He was , understandably, very nervous but quickly calmed under my sensual charm. I urged him to tell me of his desires, his struggles.

He shared his  dream , to be able to be “Who he was” in public. But was locked in a life which prohibits his exploration. That he has come to a point in his life where he wants more. Despondent because he saw no way out, I offered him a way. Of course it won’t  happen over a span of a ten minute call. But help is here for you, I told him.

Towards the end of the call he said “this was stupid calling you, I’m such freak, a loser for even doing this.” I did what I could to assure him that he is not alone, not a freak and not a loser! Many guys call to talk with me and “not get off”. That the trouble lies in our society not in your desires. I offered him some out of session email support and wished him well. I hope he is.

I am telling you now, doing what I do, you get a feel for people. He has bisexual desires, but was not calling me for Bisexual Humiliation.  There wasn’t arousal with humiliation, and was NOT getting off on it. This was a sentient being in pain over what his desires are, and how society tells him he’s wrong. In Pain because his life has been a sham and he can’t find a way out.

It took all of my wherewithal not to break down in tears, for him, on that call. My mind screamed “THIS IS SO WRONG, He should never be made to feel this way!”. To show a bit more of my human side I’ll make a confession:  I’m tearing up now writing about it to you.

I have fun with all kinds of kink, I’m an affable Woman and prone to find humor and joke about most things. This does not mean I take our sessions, your sexuality or you, insincerely. Lightheartedness aside, I take My role seriously and what My power can do to you. So with an abundance of knowledge and skill we engage in all sorts of kinky play including Humiliation.

So although I dole out humiliation like an after party mint and happily do so, I also understand when it’s not needed or wanted. In the example above, it wasn’t needed.

Identifying as a Freak isn’t a bad thing, necessarily, it’s your interpretation of the meaning which “may be bad”. You are Not a freak just because your desires are not mainstream. But if you are a little like me, enjoy kinky play which would have others clutching their proverbial pearls then  mainstream be damned!
I proudly wave My Freak Flag!