Hello there, little dick wimps! Well, to be  honest, if you are any other kinda wimp this is for you too! If you are not into wimp humiliation you can STILL stick around, you just might get a smile or two. Plus you hanging out on my blog bodes well for Mistress.
That pleases me, and you DO, want to please me. Don’t you, pet.
Good boy. Sit. Stay. ????
Today we are going to look at the Wimpus Dickless Erectus, a little known segment of the Y chromosome population.

Which came first the wimp or the little dick? This is a fantastic question. Probing the minds of my little dick pets is a favorite past time for me. Is the wimp a wimp because he has a little dick or is it purely coincidental? Would  he, could he have a massive cock yet still feel useless , have no confidence and act like a nervous twittering twit in front of beautiful Women? What I’ve ascertained through years studying Homo Wimpus Dickless, in the wild, is that the little dick came first.

The one suffering from the unfortunate deal of the DNA cards knows early on he doesn’t measure up to other males. This impacts his psyche greatly. It usually goes one of two ways.

There is the phenomenon of little dick male syndrome or LDMS for short. Similar to the napoleon complex but one minor, very minor difference. You see ,  one is often perplexed over the Napoleonic toxic behaviors emanating from a male  of normal or taller height.  Napoleon complex typically is displayed by males of lessor average height. So LDMS provides a better understanding behind the  males behavior. Trust me when I tell you, it’s because he is “short” somewhere else.  This is one way a male with a little dick may process their inferiority by being  ???? (flaming, not hot LOL)  A$$holes. See the “little difference?” ????????

Of course all little dicked males may try the college sports route thinking if they become a star athlete then, having a little D won’t be “so bad”. But, it is in those locker rooms, showers giving them opportunity to steal a glance of others genitalia that it really hits home to the adult male. For years you’ve soothed your insecure self with “It will happen for me soon” mantra. “I’m a late bloomer”. But there you are hairy balls and all, and even while flaccid you know you will never measure up.

So you strive to perfect other aspects of your manly existence. Some become successful business men, leaders in the military or in their communities. All the while  harboring a little secret.

However, when it comes to the realm of courtship you might even be a great date! So attentive, so appreciative of my female attention! Certainly you are not used to having such delightful company. But move on in the relationship and each time you muster the nerve to make a romantic move …well. You know what happens.

You see, I have a little dick wimp that wrote this about his little wimp dick life. See if it resonates with you. At the end you’ll see how I help those with little dicks

Years are being rejected.
Years of feeling defeated. 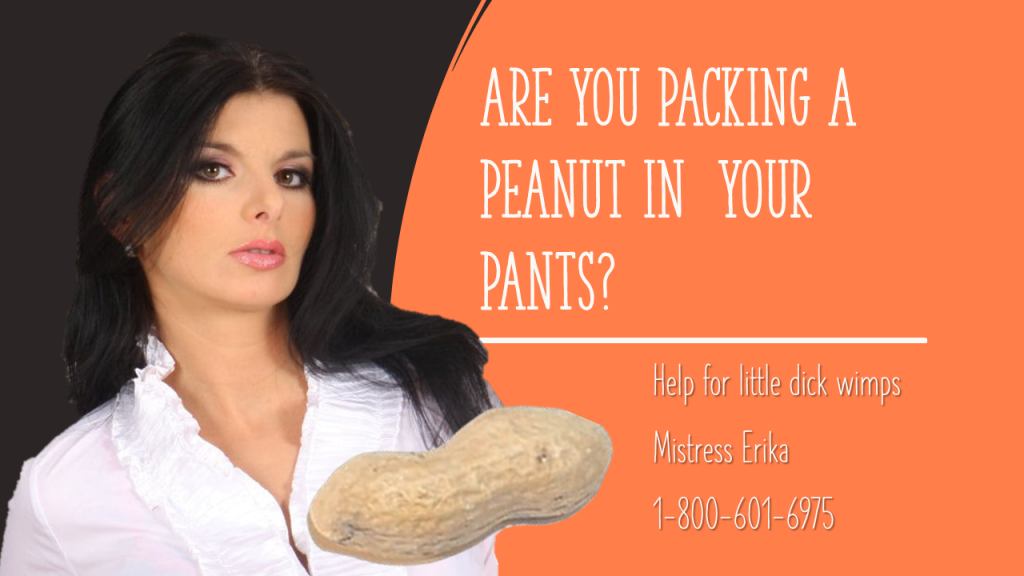 Rubbing a little mess into the palm of my hand.
Licking it up.
Feeling small.
Feeling defeated.

Accepting the futility of my inferior sexuality.

Yearning for a Mistress.
And now she is found.
And she is Headmistress Erika.
Feeling small.
Feeling defeated.
Feeling safe.
Love,
TLD

There you have it. Help for the little dick wimp is right here in Mistress’ warm (and sometimes delightfully cruel) embrace. Don’t leave your humiliation needs to the amateurs. Your humiliatrix Mistress knows exactly what you need.