Learning That I Am A Sissy

So without further delay, some more about Sissy Slut Samantha! Very little has been changed from Samantha’s own text. She gets quite naughty in parts so I’ll leave that to your imagination! Oh ! Waaait! Better yet: Call me and we’ll talk about / play it out what YOU think happened during the redacted parts! MMmm now that sounds like some fun.

Learning that I am a sissy with deep cravings to look like a woman, act like a woman, and be treated like a woman was made more dramatic by learning at the same time that I also crave being sexually dominated and thoroughly used for every kinky purpose by aggressive women.  Being feminized, paraded before others who enjoyed my completely submissive behavior and performance, and pounded with femdom strapons led directly and fairly quickly to the ultimate act of feminine sexuality and submission … cock-sucking. My mistresses brought me to this point of no return and I embraced my new sexual position and servitude with enthusiasm. 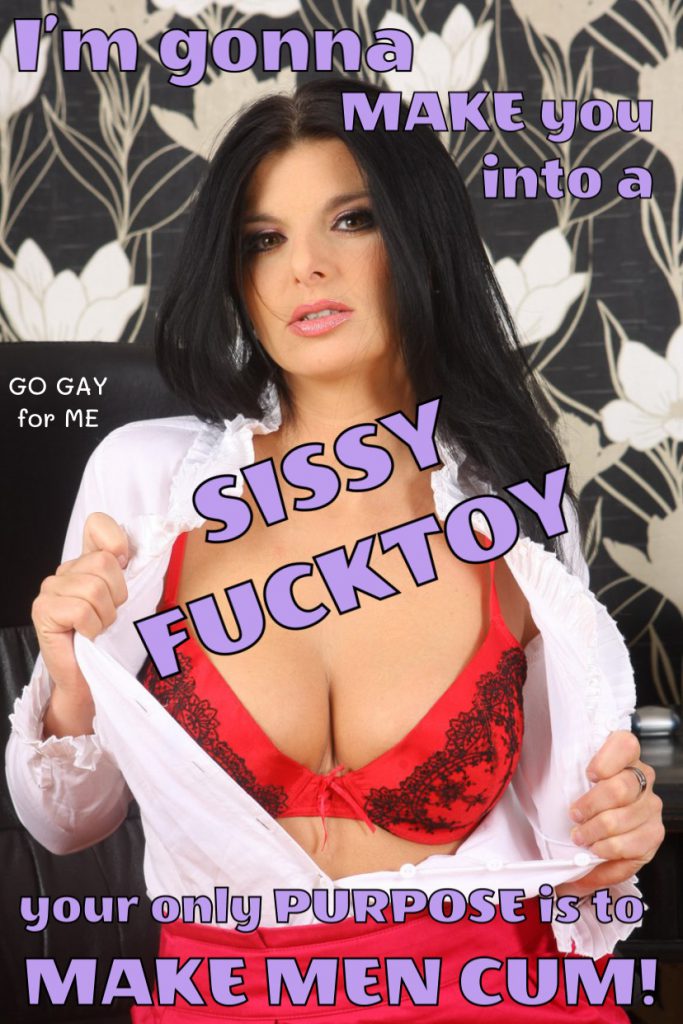 Someone made this sissy meme for me, don’t you love it?

My most experienced and thorough dominatrix decided it was my time to become a cocksucker without revealing her intentions.  In planning an upcoming session, she told me to anticipate the ultimate feminine experience. She instructed me to shop for new panties, garter belt and hose, camisole and heels.  On the day of our session, I was to go to a nail salon for a manicure and pedicure with bright red polish, and to a cosmetic store to have my makeup done professionally.  I was already under standing instructions to explain my situation to the management of every establishment to ensure that they have no problems with my purchases and services, but it also heightened the sexual tension surrounding this session with every element of preparation.

At her urging, I unbuttoned his shirt and caressed his chest.  Between wet kisses, I removed his shirt and began to slide my hands down and over his crotch. At mistress’ instruction, I unbuckled his belt and unzipped his pants. She put me on my knees. As his pants fell to the floor and his hard cock sprang free, she directed every action……”Kiss the tip, Samantha. Lick the shaft, girl. Take the head in your mouth and run your tongue all over it……[Redacted]

Samantha takes a very naughty turn, which I should leave to your imagination!

Several months later, another mistress in a different city who had listened with interest to the way I was introduced to sucking cock, began our session with me completely naked except for a pair of red stiletto heels and bright red lipstick.  She ordered me to keep silent and led me to the basement of her dungeon.

Another mistress had two blindfolded and naked submissives standing side-by-side with spreader bars between their wrists and ankles and their wrists chained to a bar above their heads.  By the look of their asses, she had worked them over thoroughly and had each of them confessing their full slavery to her every whim.

She introduced my mistress to her blindfolded slaves and told them my mistress had brought in a slave of her own to put on a little show.  “Samantha, get on your knees,” she said.  I silently complied taking a position inches in front of the limp dick of one of the well-spanked slaves.

He got hard in my mouth and she began a 10-count, spanking him with her flogger with every count.  The scene drove him crazy and he blew his load as soon as she said “now!”

When they finally offered a weak protest, the two mistresses immediately ordered them to suck their dicks [Redacted].
Finally…….

Our humiliation complete, my mistress returned me to our room to continue our session.  She knowingly advised me,
“now you have sucked cock both ways and I have to say that you seemed to really enjoy being the full-on cock-sucking slut.”

She was right.
once again, my mistresses had masterfully moved me another critical step down my path to becoming Sissy Slut Slave Samantha.

Did you like Samatha’s journey! I want to hear from you!

*yea I know it’s the second Saturday but fumble fingers Mistress scheduled it for the first SATURDAY IN JULY in error! LOL so here you go!