Pantie Boy What Kind Are You?

After having a pantie boy stuff a pair of panties in his mouth and reciting his pantie mantra, I was inspired to have a blog just about pantie boys!  Each and every one of you are pantie boys!  Oh, what’s that? I hear you smugly laughing, you assume we are all pantie boys Erika!  Oh my friend but it’s true. You are ALL pantie boys , it’s only a matter of what degree! Let’s see.

Oh my dear, you have more panties than Imelda Marcos had shoes! Dreaming of more, constantly gazing deliriously at this scalloped edge or that. So happy and excited about your pantie collection you’d change panties twice or three times a day if you could! Why, some might think you want, and are more obsessed with the pantie than the model wearing them! I bet you imagine yourself in the panties, not IN the model! LOL.  You, my dear are a pantie slut. But totally hetro, right? Yea some are. However , some of my absolute favorite pantie sluts are sissy’s too! Humm, I wonder if there’s a connection. More on that at another day.

Oh your kinky play consists of wearing panties secretly under your boy clothes. Again convinced by a devilish vixen who loves to toy and play with her   I mean boys! Oh do to anything to please Mistress, anything including wearing panties.

You, why you probably found an excuse at some point to dress as a woman for Halloween!  It is the perfect time to explore, give yourself permission to play with panties, and get other people’s reactions too! Who knows, if your girlfriend thinks it’s fun enough, maybe it’s time to confess your pantie desires!  Right? You know you’ve thought of it!

Rubbing your member on her soft panties as you start to fool around. Perhaps after she slips them off during play she grabs  you with them and you melt. Highly sensual to feel those girly  panties against 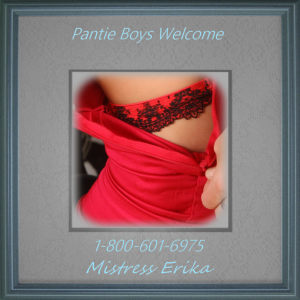 Or… oh! I know. You pantie boy have taken a pair of worn panties out of the hamper, inspected them. Sniffed them and perhaps even came on them!

Pantie boy fan is your typical male who can’t help but gaze at panties, on models, in stores, on ads anywhere he gets the opportunity to fantasize about the panties and the girl wearing them! Some of you are embarrassed at your level of arousal and focus, yea you want to get closer to those soft peach silk and lace cheeky pantie. Maybe for a little naughty play with naughty bits, but you are an undeniable Pantie boy- fan level!